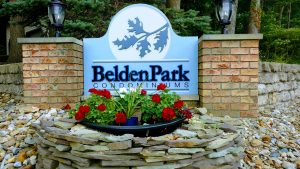 Belden Park was developed in four stages in the early 1990s for luxury condominium living.  Completed in 1994, our community contains 78 condominium units with 39 buildings, as well as significant roadways, 4 beautiful ponds and fountains, mature trees, shrubs and landscaping.    The homes share the same architectural style and include a blend of ranches and two story homes, all with cathedral ceilings, skylights and 2 car garages, many with walkout lower levels.  The developer created a ‘look and feel’ for the homes that is in direct contrast with the ‘cookie cutter’ appearance of many other developments. Most homes have views of one of the ponds and/or treed areas in this park like setting which also seems to attract abundant wildlife sightings including fish, frogs, deer, geese, ducks, and the occasional fox and hawk.

Our community is located in the heart of Jackson township, thus using the Jackson police, fire, and schools.  We are just minutes from Belden Village shopping & dining, KSU Stark/Stark State, theaters, the Strip & I77.  Our close proximity to so many services says ‘city’ but the ambience is ‘country’.

We have engaged the same professional management company, Grace Property Services, since inception. Caite Cheatwood is the Association Manager who oversees the daily operations.  The Board of Directors meets at least 10 months each year and is actively engaged in areas such as:

The all volunteer Board of Directors embarked on major capital improvement projects in 2013 to replace all the roofs and skylights, and resurface the roads. The timely and cost effective resolution of these major capital improvements, along with ongoing prudent management of financial resources, have resulted in a solid reserve position.  Belden Park is a fully funding association.

The masthead of our newsletter, which is published after each board meeting, proudly states that Belden Park is the ‘Home of Good Neighbors’.

The Social Committee is in the planning process for 2019 events.

It is also a common practice for residents to wave ‘hello’ to each other as they pass by in their vehicles i.e., the ‘Belden Park wave’.  Dog owners enjoy exchanging pleasantries while their leashed pets greet their furry neighbors.  Some neighbors also enjoy sharing other social activities such as card clubs, cookouts, and group monthly dinners out at local restaurants.  Although residents can involve themselves as little or as much in the social activities available at Belden Park, it is comforting to know that the general feeling is that there are neighbors who genuinely care and watch out for each other.